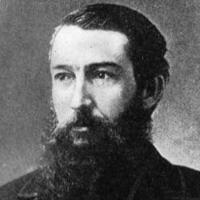 1,000 карма
Sidney Clopton Lanier[1] (February 3, 1842 – September 7, 1881) was an American musician, poet and author. He served in the Confederate States Army as a private,[2] worked on a blockade-running ship for which he was imprisoned (resulting in his catching tuberculosis), taught, worked at a hotel where he gave musical performances, was a church organist, and worked as a lawyer.
Популярные
Последние
Популярные
Читаемые
Комментируемые
Аудио
Видео
Все работыПоиск
Вид
Стандарт
Компактный
O marriage-bells, your clamor tells Two weddings in one breath
HE marries whom her love compels: — And I wed Goodman Death
My brain is blank, my tears are red;
Listen,
Читать дальше
In the South lies a lonesome, hungry Land;
He huddles his rags with a cripple's hand;
He mutters, prone on the barren sand,    What time his heart is breaking
He lifts his bare head from the ground;
Читать дальше
Land of the willful gospel, thou worst and thou best;
Tall Adam of lands, new-made of the dust of the West;
Thou wroughtest alone in the Garden of God,
Till He fashioned lithe Freedom to lie for thine Eve on thy breast — Till out of...
Читать дальше
The innocent, sweet Day is dead
Dark Night hath slain her in her bed
O,
Moors are as fierce to kill as to wed
Читать дальше
"So pulse, and pulse, thou rhythmic-hearted Noon That liest, large-limbed, curved along the hills,
In languid palpitation, half a-swoon With ardors and sun-loves and subtle thrills;"Throb,
Beautiful
while the fervent hours...
Читать дальше
That air same Jones, which lived in Jones,  He had this pint about him:
He'd swear with a hundred sighs and groans,
That farmers
ST stop gittin' loans,  And git along without 'em:
Читать дальше
My soul is like the oar that momently Dies in a desperate stress beneath the wave,
Then glitters out again and sweeps the sea:
Each second I'm new-born from some new grave
Читать дальше
"O Trade
O Trade
would thou wert dead
The Time needs heart — 'tis tired of head:
Читать дальше
In the far North stands a Pine-tree, lone,
Upon a wintry height;
It sleeps:  around it snows have thrown A covering of white
It dreams forever of a Palm That, far i' the Morning-land,
Читать дальше
Oft seems the Time a market-town Where many merchant-spirits meet Who up and down and up and down Cry out along the street Their needs, as wares; one
US, one SO: Till all the ways are full of sound: — But still come rain, and sun, and snow, A...
Читать дальше
Life swelleth in a whitening wave,
And dasheth thee and me apart
I sweep out seaward: —  be thou brave
And reach the shore,
Читать дальше
Heartsome Ireland, winsome Ireland,
Charmer of the sun and sea,
Bright beguiler of old anguish,
How could Famine frown on thee
Читать дальше
Glooms of the live-oaks, beautiful-braided and woven With intricate shades of the vines that myriad-cloven Clamber the forks of the multiform boughs, -- Emerald twilights, -- Virginal shy lights,
Wrought of the leaves to allure to the whisper...
Читать дальше
Across the brook of Time man leaping goes On stepping-stones of epochs, that
Fixed, memorable, midst broad shallow flows Of neutrals, kill-times, sleeps, indifferencies
So twixt each morn and night rise salient heaps:
Some cross wit...
Читать дальше
For ever wave, for ever float and
Before my yearning eyes, oh
dream of
Wherein I dreamed that time was like a vine,
Читать дальше
Fair is the wedded reign of Night and Day
Each rules a half of earth with different sway,
Exchanging kingdoms,
East and West, alway
Читать дальше
Показать больше