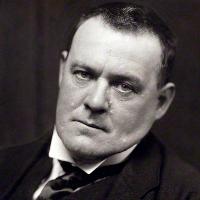 1,001 карма
Joseph Hilaire Pierre René Belloc (27 July 1870[1] – 16 July 1953) was a British-French writer and historian and one of the most prolific writers in England during the early twentieth century. Belloc was also an orator, poet, sailor, satirist, writer of letters, soldier, and political activist.
Популярные
Последние
Популярные
Читаемые
Комментируемые
Аудио
Видео
Все работыПоиск
Вид
Стандарт
Компактный
It was my shame, and now it is my boast,
That I have loved you rather more than most
Читать дальше
Sally is gone that was so kindly,
Sally is gone from Ha'nacker
And the Briar grows ever since then so blindly;
And ever since then the clapper is still…And the sweeps have fallen from Ha'nacker Mill
Читать дальше
Lord Lundy from his earliest
Was far too freely moved to Tears
For instance if his Mother said,"Lundy
It's time to go to Bed
Читать дальше
My jolly fat host with your face all a-grin,
Come, open the door to us, let us come in
A score of stout fellows who think it no
If they toast till they're hoarse, and drink till they spin,
Читать дальше
May all my enemies go to hell,
Noel,
Noel,
Noel,
Читать дальше
Hoar Time about the house betakes him slow,
Seeking an entry for his weariness
And in that dreadful company
And the sad night with silent footsteps go
Читать дальше
The nicest child I ever
Was Charles Augustus Fortescue
He never lost his cap, or
His stockings or his pinafore:
Читать дальше
Of Courtesy, it is much
Than Courage of Heart or Holiness,
Yet in my Walks it seems to
That the Grace of God is in Courtesy
Читать дальше
The moon on the one hand, the dawn on the other;
The moon is my sister, the dawn is my brother
The moon on my left and the dawn on my right-My brother, good morning; my sister, good night
Читать дальше
Do you remember an Inn,
Miranda
Do you remember an Inn
And the tedding and the spreading of the straw         for a bedding,
Читать дальше
When people call this beast to mind,
They marvel more and
At such a little tail behind,
So large a trunk before
Читать дальше
The species Man and
Are intimately linked;
The Marmozet survives as yet,
But Men are all extinct
Читать дальше
The Dromedary is a cheerful bird:
I cannot say the same about the Kurd
Читать дальше
Who caroused in the Dirt and was corrected by His
His uncle came on Franklin
Carousing in the Dirt
He shook him hard from Side to
Читать дальше
The Whale that wanders round the
Is not a table fish
You cannot bake or boil him
Nor serve him in a dish;
Читать дальше
There was a Boy whose name was Jim;
His Friends were very good to him
They gave him Tea, and Cakes, and Jam,
And slices of delicious Ham,
Читать дальше
Показать больше