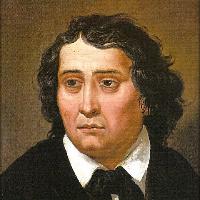 1,002 карма
France Prešeren (2 or 3 December 1800 – 8 February 1849) was a 19th-century Romantic Slovene poet whose poems have been translated into English, French, German, Italian, Spanish, Hungarian, Slovak, Polish, Russian, Ukrainian, Belorussian, Bengali, as well as to all the languages of former Yugoslavia, and in 2013 a complete collection of his "Poezije" (Poems) was translated into French.
Популярные
Последние
Популярные
Читаемые
Комментируемые
Аудио
Видео
Все работыПоиск
Вид
Стандарт
Компактный
A Slovene wreath your poet has entwined;
A record of my pain and of your praise,
Since from my heart's deep roots have sprung these lays,
These tear-stained flowers of a poet's mind
Читать дальше
O,
Vrba, happy village, my old home -My father's cottage stands there to this day
The lure of learning beckoned me away
Its serpent wiles enticing me to roam,
Читать дальше
1 Let my poem, like a shrine, contain - your name;
In my heart shall ever proudly reign - your name;
Let my cuntrymen hear echoes, east and west,
Of the music in that joyous strain - your name;
Читать дальше
Mid wastes of Africa a wanderer sped:
He found no pathway; night was now afield
Through clouds no stealthy glimmer was revealed;
Craving the moon, he made the grass his bed
Читать дальше
(an excerpt from the epic The Baptism at The Savica)The warring clouds have vanished from the skies;
The war of men has ended with the night
The morning sun gilds the tree heads that
Supreme above the Carniola's snowpeaks white
Читать дальше
O happier half of days decreed to me,
My early years, so soon you passed away:
Few were the flowers that blossomed on that tree,
And they, scarce budded, fell into decay
Читать дальше
O'er thee,
Misfortune,
I have ceased to wail,
I'll utter no reproaches any more
Читать дальше
What was the need of you, little one,
My baby dear, my darling son,
To me - a girl, a foolish young thing,
A mother without a wedding ring
Читать дальше
He who from fate receives but blow on blow,
Who, like myself in her disfavour stands,
Although he had a hundred mighty hands,
Would vainly strive for riches here below
Читать дальше