Here at the Super Duper, in a glass

Supplied by a rill of cold fresh

Running down a glass washboard at one

And siphoned off at the other, and

Perpetually renewed, a herd of

Is made available to the

Who may choose whichever one he

To carry home and drop into boiling

And serve with a sauce of melted butter.

Meanwhile, the beauty of strangeness

These creatures, who move (when they do)With a slow, vague wavering of claws,

As he crawls over the shell of a

Speckled with black, their camouflage at home,

Make them conspicuous here in the

Philosophers and at the same time

Herded together in the marketplace,

Except for certain tentative

Of their antennae, or their imperial

Pegged shut with a whittled stick at the wrist.

We inlanders, buying our needful food,

Pause over these slow, gigantic

We pause and are bemused,

And sometimes it happens that a mind sinks

To the blind abyss in a swirl of sand, goes

And archaic in a carapace of horn,

There's something underneath the world.

The flame beneath the pot that boils the water. 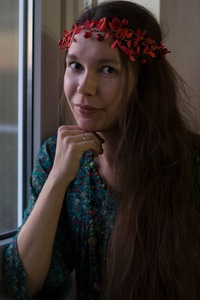